We are living in a highly digital world where computers run almost every system. Whatever your industry is, you can’t avoid using a computer yourself because that’s how most businesses and organizations work these days. You can’t definitely go wrong if you go after a computer-related career because the demand for it will always be high. In the past, it was actually women who pioneered computer programming because men likened coding to clerical tasks. Coding was generally thought of as a job for women while the men busied themselves in creating the hardware itself. However, men eventually took over and pursued careers in computer perhaps because of their natural preoccupation with gadgets and anything that is digital but mainly because the pay significantly increased. The demand for coders grew and it captured the men’s interest who eventually took the job away from women. 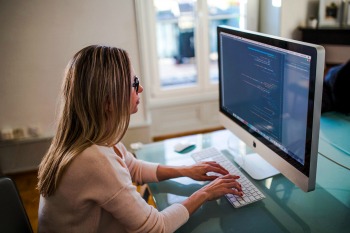 Fast-forward to today, women are increasingly gaining interest as computers become cooler and fun to use. They are no longer the boring boxes that nerdy guys were all over with back in the days. Today, cool people use computers heavily in their lives. And even if just for leisure, just the sheer thought of social media can excite anyone. Computing technology is no longer limited to just computers since there is also smart technology that is just as exciting.

Close your eyes and picture a computer science college student. In all likelihood, you imagined a male. Sadly, statistics about who decides to major in computer science in college back you up. In 2015, women earned only 18% of all computer science degrees in the nation; that percentage dips even lower for women of color, according to the National Center for Education Statistics.

And while identifying the root cause for this gap is difficult, researchers are finding that what happens in a CS college classroom can greatly influence women’s decision to enter or stay out of the programming field. While there is increased interest in addressing gender disparity in Silicon Valley as well as a push to expose young girls to coding, more research is needed to understand the role that colleges can play in the diversity process.

The public assumes that most women are inherently not interested in computers given the statistics. Even today where female professional coders are widely accepted globally, not that many women still take up computer courses in college. Computer professionals need to have the knowledge and skills about computing that you can mostly learn during college. If women lack those two, they’ll have a hard time landing any computer-related job after graduating.

Even at home, parents are likewise more inclined to purchase computers or video games for their son and not their daughter. In the process, women lose exposure to tech devices where they can decide for themselves whether they like using it or not.

A new course at town public high schools would look to attract women into computer science, a male-dominated field whose broader make-up is often reflected in high school classrooms.

The class, Computer Science Principles (CSP), is based on a new Advanced Placement course and requires only Algebra 1, a course typically taken in eighth or ninth grade, as its precursor. It was presented to the Board of Education last week and would launch its first class at Fairfield Warde High School this fall, pending board approval.

As the district has grown its computer science and programming offerings in recent years, CSP would aim to be a more accessible course that would help bring diversity to a field with few women and minorities.

“I really hope that it draws students into the computer sciences,” said Margaret Boice, Director of Secondary Education.

Men are more adept at handling computers in the same way that they are better with numbers whereas women mostly excel in language. Having these computer and coding courses during high school gives female students a chance to really choose the career path they want to take in college, whether it is computer-related or not, and be exposed to what computing is all about. Making it big as a female coder is not an easy task in an industry dominated by men, so it helps if the female population also get to enjoy the same computing perks that men enjoy at a young age. Maybe it will increase the chances of young girls pursuing computer-related courses on their own and establish careers alongside geeky males who excel in the field.

The Need For More Female Computer Programmers is republished from NakedConversations.com