Before even going to school, children learn from their parents first or from whoever it is taking care of them from an early age. Parents are considered as role models in a lot of ways because kids often imitate what they do. But as soon as a child starts attending school, they spend more time in the four corners of the classroom than at home. They interact with other kids their age and they look up to their teachers who teach them a lot of things about life. It’s when parents often take the back seat and they pass most, if not all, of the responsibility to the teachers in educating their child. 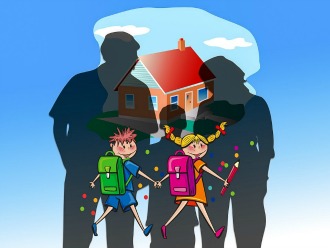 However, that should not be the case. Children need their parents in as much as they need their teachers. There are things they learn from school but they learn more about real life at home. Kids also perform better academically if their parents are hands-on on their education and often check on them and offer help when needed. Back then, parents worked alongside teachers but now, only the teachers put in almost all the effort. As a result, the child loses a lot when they don’t have the support only their parents can give. Add to that the many technological distractions today like social media, a student’s grade suffers and they perform poorly in class too.

America‘s schools are caught in a peculiar vise. We’ve made it clear that we expect schools to succeed with every child. That wasn’t always the norm. Over the past 25 years, though, reformers on the left and right fought to ensure that schools be expected to educate every child. Today, we largely take that mission for granted. That represents a tectonic shift and a tremendous victory.

Back in the 1980s and 1990s, American education paid a lot of attention to the quality of parenting and far too little to the quality of teaching and schooling. It wasn’t unusual to hear educators declare that certain students were unteachable or that they couldn’t be blamed for not teaching kids who weren’t there to learn.

Parental responsibility is no longer discussed openly and when they do, it is often in hushed voices as the teachers are afraid to upset parents. However, you can’t always blame the parents if they aren’t too keen on attending to the needs of their child in school. Both are presumably working and are overstressed and overburdened with responsibilities that what little time they have left they often take advantage of it to catch some sleep and rest. They are often confident that the teachers can handle everything at school but that is not always the case.

Last month, the US Department of Education released data showing that 13% of American students, over 6 million children, missed more than 15 days of school during the 2013-2014 school year. The same data showed that students who are chronically absent experience a host of negative outcomes, including lower levels of learning and increased likelihoods of being held back and dropping out.

One of us (Robinson) recently called for education reformers to “stop giving parents a pass” and instead seek ways to hold parents responsible for educating their children. To build on this conversation, it is useful to examine ways policy can hold parents accountable for reducing truancy. One state — Georgia — can provide a window into what this conversation might look like at the national level.

In 2004, Georgia decided to hold parents responsible by enforcing the state’s school attendance law. This effort sprang from a series of five meetings that then-Governor Sonny Perdue hosted in early 2003. There were five separate meetings: one with teachers, one with principals, a meeting with superintendents, one with school board members, and one with parents and their students. In each meeting, there was one representative from each of the 180 public school districts in Georgia. Each district chose the attendees, so a large majority of the “parents” were also public school employees.

Parents almost always had the last say when it comes to their kids. They ultimately make the decision that shapes their children’s lives especially when it comes to their education. Also, most students are minors and the state expects their parents to supervise them and guide them in their studies. Meanwhile, teachers also play a big part as well as the sufficient support and government funding in most public schools for the less fortunate who can’t afford to pay for high tuition fees in private schools.

You learn as you go. Parenting does not come with a rulebook. It’s a journey of hits and miss and hopefully, many wonderful memories along the way. While schools can’t always expect parents to be totally hands-on with their children’s studies, they should at least reach an agreement or have a clear understanding of what their responsibilities are when it comes to school and up to what extent they should be involved in their child’s studies. That’s when the child wins and they have bigger chances of succeeding later in life.

The following blog post Parents Should Be More Involved In Their Children’s Education was initially published to https://www.nakedconversations.com